neuroVEX™ is an innovative brain, cognitive, clarity and mental focus formula that features eight carefully selected science-based ingredients including Acetyl-L-Carnitine (ALCAR), CDP Choline (Citicoline), DMAE Bitartrate (Dimethylethanolamine), Glucuronolactone, Phosphatidylserine, Ginkgo biloba, Bacopa monnieri, and Huperzine A. As we age, we all experience significant changes in memory and overall brain function. Aging is associated with consistent impairments in cognitive processes (e.g., memory, processing speed, executive function, and learning). neuroVEX’s™ comprehensive formula was specifically designed to help reduce the impact of the normal aging process and support the overall functions of the brain.
Acetyl-L-Carnitine or ALCAR is the principle acetyl ester of L-Carnitine and naturally found in the body. Simply put, the acetyl group allows L-Carnitine to pass the blood-brain barrier more efficiently enhancing its function. Numerous published scientific studies have shown a wide range of ALCAR benefits in brain function. These include generating cellular energy for brain metabolism and increasing alertness. Other health benefits include reducing neuro-inflammation, neuroprotective effect, antioxidant function, with promises of delaying age-related progression of mental deterioration.
CDP (Cytidine 5’-diphosphocholine) Choline or Citicoline plays an essential role in the biosynthesis of structural phospholipids in cell membranes, particularly phosphatidylcholine. Once absorbed, citicoline is widely distributed throughout the body, crosses the blood-brain barrier entering the central nervous system where it is incorporated in the structural components of cell membranes. As we age, this process is diminished resulting in a reduction in brain structure and function.

Take 2 capsules per day with juice or water.

KEEP OUT OF REACH OF CHILDREN. STORE IN A COOL, DRY PLACE AWAY FROM MOISTURE, SUNLIGHT AND EXCESS HEAT. ALWAYS KEEP TIGHTLY SEALED. 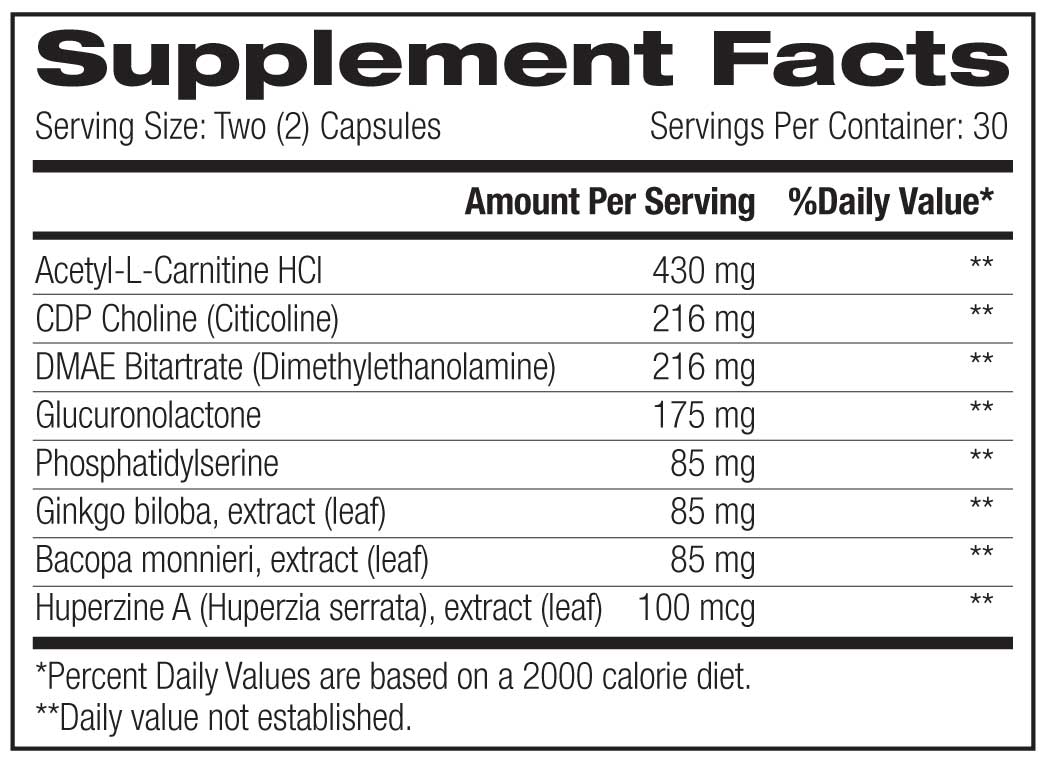 NOT FOR USE BY INDIVIDUALS UNDER THE AGE OF 18 YEARS. DO NOT USE IF PREGNANT OR NURSING. Consult a physician before starting any diet and exercise program and before using this product. Do not take this product if you have a medical condition. Discontinue use and call a physician or licensed health care professional immediately if you experience unexpected side effects. If taking prescription medications, consult a licensed health care professional prior to use.

Digestive Detoxification and Weight Loss
$19.99
cleanse & lean not only improves your health, but also...