stimoVEX-XT™ is an innovative, extreme thermogenic and energy enhancing weight loss formula containing the highest quality and purest ingredients for effective results. The main thermogenic ingredients in stimoVEX•XT target the release, transport and burning of fat. Additional ingredients enhance energy, mental focus and clarity. stimoVEX•XT is driven by several patented and branded ingredients including Kinetiq™ Citrus Thermogenic Blend (contains standardized Citrus aurantium extract plus bioflavonoids Naringin and Hesperidin), Berberine, Amla (Indian Gooseberry) Extract, AlphaSize® Alpha-Glyceryl Phosphoryl Choline (A-GPC), and BioPerine® in addition to Caffeine, Yohimbine, and Hordenine. The stimoVEX•XT formula is designed to jump start fat and energy metabolism and based on published science to deliver positive results.†
Kinetiq™ Citrus Thermogenic Blend is a next-generation, patented thermo combo containing standardized Citrus aurantium, the bioflavonoid Naringin and bioflavonoid Hesperidin that has been clinically shown to increase thermogenesis and weight management compared to a placebo. The patented standardized extract of the citrus fruit Citrus aurantium contains a complete and naturally occurring synergistic family of bioactive amines including synephrine, N-methyltyramine, hordenine, octopamine and tyramine. The form of synephrine is call p-synephrine and is the only safe form of synephrine for humans. The patented standardized extract of Citrus aurantium has been shown to be safe and effective in over 30 research studies and scientific reviews showing it stimulates metabolic thermogenesis, promotes fat breakdown, increases the ratio of lean muscle to total body mass and exerts an appetite suppressing effect. Most importantly, the patented standardized extract of Citrus aurantium has no effect on normal cardiovascular function and is unequivocally safe for human consumption. The bioflavonoids Naringin and Hesperidin provide strong anti-inflammatory and antioxidant activity. Both Naringin and Hesperidin further increase energy metabolism and expenditure providing weight management benefits. †
Berberine is a compound derived from the Chinese medicinal plant Coptis chinensis. Studies have shown that Berberine increases energy expenditure, limits weight gain, enhances thermogenesis and enhances brown adipose tissue (BAT) activity in obese mice. Berberine also inhibits AMP-activated protein kinase (AMPK) which is a key sensor and regulator of glucose, lipid and energy expenditure in the body. †
AlphaSize® Alpha-Glyceryl Phosphoryl Choline (A-GPC) is a patented and branded ingredient from Chemi Nutra. A-GPC is the “premier” choline donor that significantly increases acetylcholine levels in the brain to optimize mental focus, sharpen agility and delay mental fatigue. AlphaSize® A-GPC also supports the hormonal benefits of Growth Hormone for overall healthy body composition. Amla (Emblica Officinalis), or Indian gooseberry, is rich in polyphenolic antioxidants and vitamin C and has been used traditionally for a wide variety of health benefits. †

Test your tolerance by taking 1 capsule with or without food. If well tolerated, take a full serving of 3 capsules with or without food. Stay well hydrated throughout the day while using this product especially in hot and humid temperatures. DO NOT TAKE AFTER 6 PM. MAY CAUSE SLEEPLESSNESS. 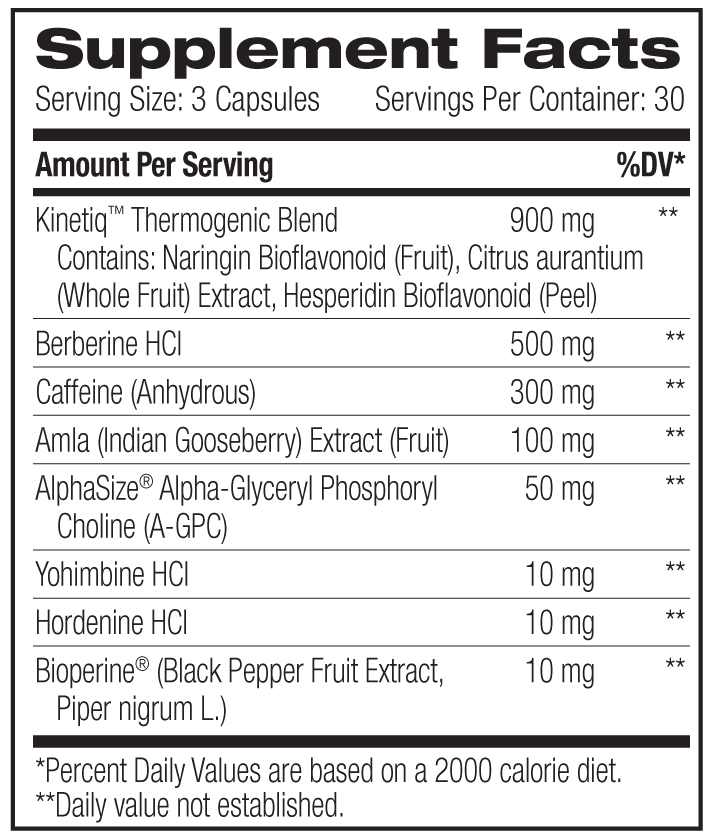 NOT FOR USE BY INDIVIDUALS UNDER THE AGE OF 18 YEARS. DO NOT USE IF PREGNANT OR NURSING. Consult a physician before starting any diet and exercise program and before using this product. Do not take this product if you have a medical condition. Discontinue use and call a physician or licensed health care professional immediately if you experience unexpected side effects. If taking prescription medications, consult a licensed health care professional prior to use. This product contains 300 mg caffeine per serving, the equivalent to approximately 3 cups of coffee. Limit the use of caffeine-containing medications, foods, or beverages while taking this product because too much caffeine may cause nervousness, irritability, sleeplessness, and, occasionally, rapid heartbeat. Stay well hydrated throughout the day by drinking at least 2 liters of water daily when using this product.

Digestive Detoxification and Weight Loss
$19.99
cleanse & lean not only improves your health, but also...